From Germany to the whole world: A portrait of the recumbent bike manufacturer HP Velotechnik

The passion for advanced bicycle technology brought the two friends Paul Hollants and Daniel Pulvermüller together early on. While still at school, the students won the JUTEC design competition of the Association of German Engineers with their fully suspended cabin trike – the foundation for the development from a garage workshop to one of the most innovative bicycle companies in Germany. Hollants and Pulvermüller founded HP Velotechnik during their studies of industrial engineering at the Technical University of Darmstadt. The company name is composed of the surnames of the company founders and alludes at the same time to the English designation of the then still exotic vehicles: Human Powered Vehicles.

Since 1993, HP Velotechnik has been working passionately on optimizing bicycles and accessories for active people. Today HP Velotechnik, with 50 employees, among them many specialized mechanics and engineers, produces about 2000 bikes and trikes per year and is one of the leading recumbent manufacturers in Europe. All signs point to future growth: HP Velotechnik exports more and more bikes and trikes to more distant regions such as Australia, Japan, or South Africa.

"HP Velotechnik stands for state-of-the-art, reliable recumbent bike technology: agile, laid-back cycles designed to offer ultimate comfort and great views. Ergonomics and design rank high. No matter whether on the daily ride to work or the long bike adventure - on our recumbent bikes and trikes, you can feel good, look good, and make excellent progress."

Paul Hollants, one of the two founders of HP Velotechnik, is responsible for public relations and commercial management. 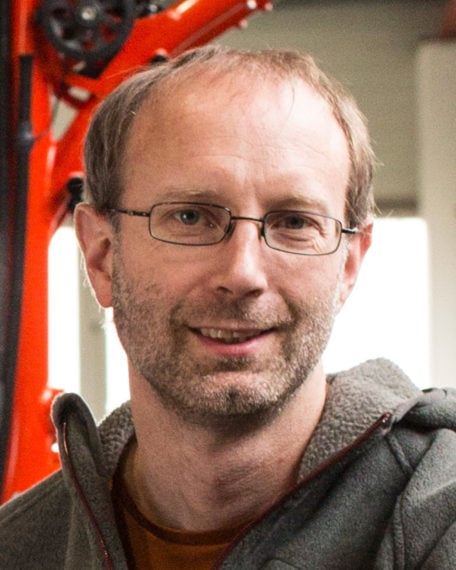 In the modern recumbent bike factory in Kriftel, Germany, the bikes are individually assembled by hand. A welding workshop enables the company to build its own prototypes, and computer-controlled test benches are used to assure the quality. The focus is on the development of innovative bicycles and corresponding accessories as well as the individual assembly according to customer requirements using the extensive modular system. The basis for the success of these innovations is the extensive customer experience on the roads all over the world.

Before new ideas are implemented in series production, the specialized engineers in the development team will always carry out rigorous tests. The company’s R&D activities are complemented by cooperation and research projects with universities. Durable, high-quality bikes and trikes will have priority over short product change cycles. For the best possible personal customer advice and service on the spot, the cycles are sold exclusively through qualified bicycle dealers. 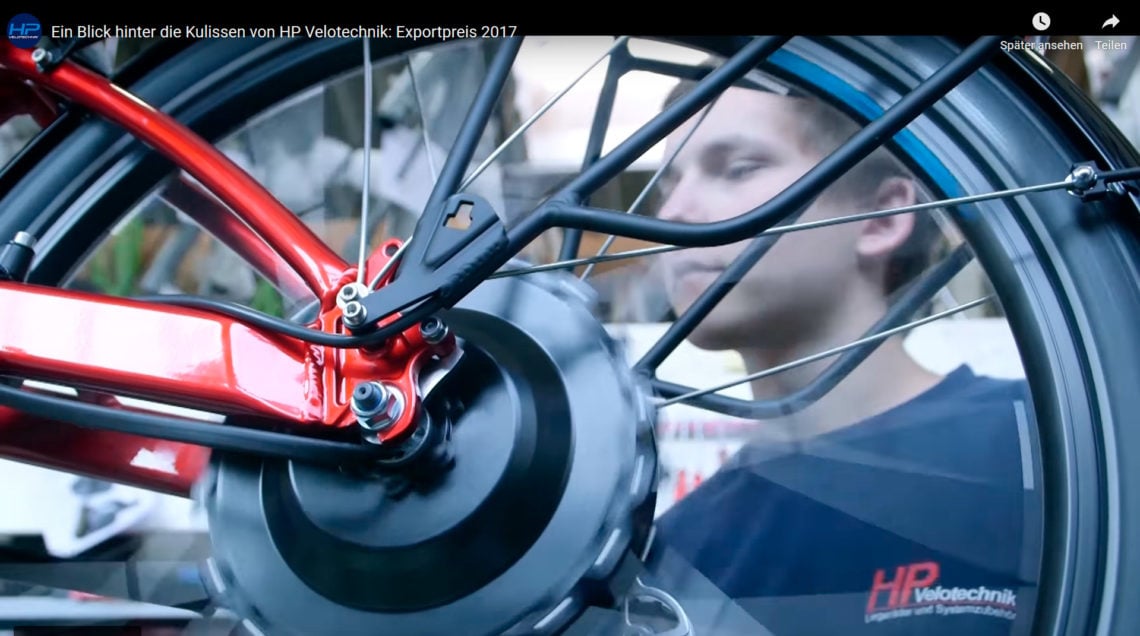 *The video embedded here is provided via the YouTube platform. When you start playing the video – even with the extended privacy settings used by us – a connection to the provider’s servers is established. Among other data, information may be transmitted that allows YouTube to analyze your surfing behavior, for example. This applies in particular if you are logged into your YouTube account.

The centerpiece: The lightweight, stiff frame is based on large-volume tubes made of the high-strength aluminum alloy AL7005, which has proven it’s worth many times over in the field of touring bikes. The tubes are joined with CNC milled precision parts and forged pieces specially manufactured for HP Velotechnik using the best frame construction techniques.

Tricycles are exposed to very high torsional forces when cornering, accelerating and braking, especially with luggage loads. To bring your pedaling power efficiently onto the road at all times, the engineers at HP Velotechnik minimize unwanted elastic flexing of the frame. An example: The Scorpion main frame tube with a solid 2 mm wall thickness offers 34 percent higher torsional stiffness compared to a steel tube of the same weight with 1 mm wall thickness. You will feel it immediately: in the precision of the steering, the sporty handling, and the safe braking behavior. 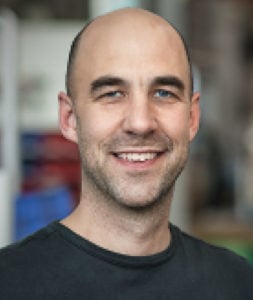 “A driving sensation like in formula 1, enormous stability on snow or gravel or with luggage facing a hill climb – whoever has tested our touring trikes has quickly been fascinated by the driving pleasure. And you don't even have to take your feet off the pedals for your snack break!”

Precise craftsmanship under inert gas leads to impressively finely scaled, extremely resilient TIG welding seams. Afterwards, several hours of heat treatment are carried out in large ovens to release stresses from the welding process in the material and to achieve maximum final strength. After fine sanding of the surfaces, the frame is given an anti-corrosion layer on the outside and inside, the basis for the subsequent protective and decorative powder coating – if you wish, even in your favorite custom color!

What you should know about the production in our factory and how a recumbent trike comes into being was filmed by our American friend Matthew Galat. The globetrotter was present with his video camera when his Scorpion fs 20 trike was assembled in our manufactory – and has been a faithful companion in many years, on travels from China to the USA. 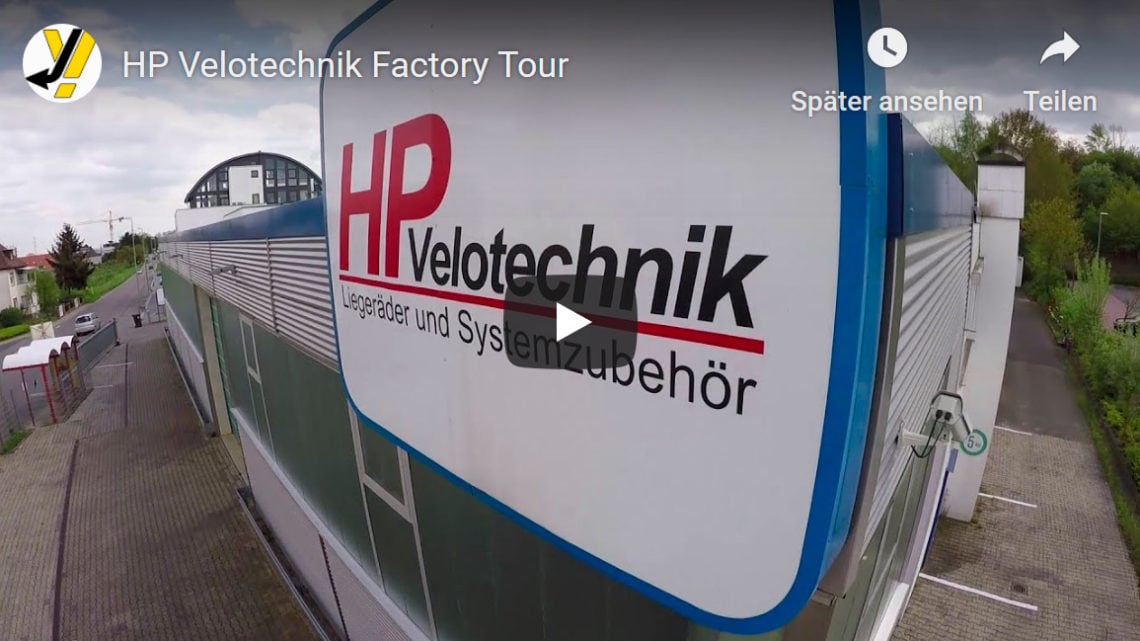 *The video embedded here is provided via the YouTube platform. When you start playing the video – even with the extended privacy settings used by us – a connection to the provider’s servers is established. Among other data, information may be transmitted that allows YouTube to analyze your surfing behavior, for example. This applies in particular if you are logged into your YouTube account.

HP Velotechnik products won several prestigious design prizes; the company has received many awards for outstanding quality and excellent customer service. HP Velotechnik is investing substantially for this. In the manufactory in Kriftel near Frankfurt, HP Velotechnik’s expert engineers assemble the recumbents individually by hand. A welding workshop enables the company to build its own prototypes, and computer-controlled test benches are used to assure the quality.

Great advantage for customers: With HP Velotechnik’s modular system and the online configurator you can choose the equipment of your bike entirely according to your needs. By individual consultation in the specialized bike shop in your proximity, thorough test rides, practical accessories, and competent workshop service, you get a recumbent bike that is perfectly suited to you.

HP Velotechnik is a member of the Zweirad Industrie Verband (ZIV), the national association representing the interests of the German and international bicycle industry as well as the components and accessories industry. The ZIV, which has existed in its present form since 2000, takes care of the interests of the approximately 80 member companies towards government, authorities, legislators, media, institutions, and organizations and is also active at the European level. Also, the ZIV is actively promoting the benefits of bicycles among the population and all relevant decision-makers.

HP Velotechnik is a member of the V.S.F. bicycle association. The objective is, among other things, to achieve high-quality standards for first-class service, competent advice and high-quality products relating to bicycles, as well as to represent the professional, technical, economic and cultural interests of its members. In the bicycle manufacturer evaluation organized by the VSF, HP Velotechnik was awarded the title of best bicycle manufacturer in Germany for five times.

The Allgemeine Deutsche Fahrrad Club e.V. ADFC represents the interests of everyday cyclists. It promotes bicycle use and travel by bicycle, advocates the construction of appropriate cycle paths and bicycle parking facilities and also offers a wide range of services for its members. This includes certain insurance policies for cyclists, basic information for cycling tours, but also the publication of books and cycling maps. HP Velotechnik supports the work of the ADFC financially and in a non-material way as a supporting member.